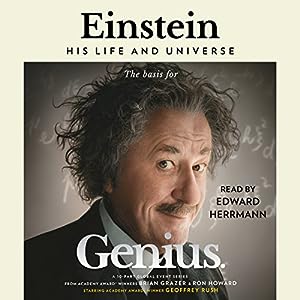 I just finished to read this book and there are few aspects I really enjoyed.

It was a long book that the master of biographies (Walter Isaacson) wrote based on the newly released personal letters of Albert Einstein.

I liked to learn about Einstein personality and his private life as well as his academic achievements. His imaginative and ‘thinking out of the box’ approaches enable him to create a revolution. To me, the amazing part, is that he only used his mind. No experiments or ‘tools’ that will guide him.

The book explores how an imaginative patent clerk came with theories that changed the way we understand the universe. We get a description of a struggling father in a difficult marriage who couldn’t get a teaching job or a doctorate. I learned that unlike the pop culture that claimed he was an awful student, he was a good one. He wasn’t strong in french but in math and physics, he was a good student who got high scores.

One of the thing that I found as a surprise, was the fact that he knew that he is going to win the Nobel prize. He also promised his first wife the money from the prize.

His success came from questioning conventional wisdom and marveling at mysteries that struck others. In a way, it was a bless for him to work at the patent office and to learn to question everything. In this role, he had a lot of free time (almost half a day) to think and develop his theories. In many of his most famous papers he finish with a call to experiments. Luckily for him, war world I ‘saved’ him and his theory on light banding due to gravity. Much later, before war world II this theory was proved.

He was a pacifist and he embraces respect for free minds, free spirits, and free individuals. He spoke about it openly and wasn’t worry from the implications. I wonder, if he lived today, he was part of Yale or moved to the Bay Area… I’m quite sure he would have be one of the advocates for free-software and the open source world.

His ability to change his mind was one of his key strengths.
He thought that “god doesn’t roll the dice” and wasn’t accepting the randomality of the quantum theory. Nevertheless, he did think that many aspects of it are valid and we do need to find the connecting line between the quantum mechanics and general relativity.
There is general relativity, which beautifully accounts for gravity and all of the things it dominates: orbiting planets, colliding galaxies, the dynamics of the expanding universe as a whole. That’s covering everything that is big or huge.
Then there is quantum mechanics, which handles the other three forces—electromagnetism and the two nuclear forces.
Late in his life, he really wanted to combine the two theories and have one theory the rule everything.

Overall, I highly recommend this book.
It was interesting to learn about his personal life and to see that such a genius had some weakness.